Colton and his girlfriends spent the week in Singapore, which looks LIT for the record. My only connection to Singapore is that my mom had me do Singapore Math when I was younger and it was fun.

Not the point. There were two one-on-one dates and of course a group date. Tayisha scored the first one-on-one date, and honestly I didn’t know who she was. But #TeamSwirl so I was happy for her.

The date card says something about “falling” in love, and Tayisha naively thinks they’re going to a waterfall. Um, no. Odds of you having to scale down a building or jump out of a plane are WAY higher than a date at a waterfall. Have you seen this show before, girl!?

Well, I was pretty close. Colton and Tayisha are going bungee jumping. Colton doesn’t get nervous until he’s at the top, but puts on a brave face…until he’s falling and screams, “OH NO NOT AGAIN!” when he starts bouncing at the bottom. I guess he doesn’t understand how bungee cords work. It’s Tayisha’s turn, and Colton cheers her on. So supportive. *insert Tayisha and Colton’s aggressive make out*

They head off to dinner where Tayisha drops a BOMB that has not been teased by the producers. *GASP* Tayisha has been married. She married her first boyfriend and it didn’t work out so she got divorced.

Tayisha: I was married and recently got divorced.
Me: #TheBachelor pic.twitter.com/ZF4I5ROZtx

Can we talk about what a wild move it is to have one boyfriend, marry him, get divorced and then your second “boyfriend” is the bachelor? This girl honestly did it right. Take the chance to travel and go on really cool dates, and make your ex-husband watch you rebound on national TV. I love her for this. Thankfully, Colton’s down with her too so she gets a rose.

Now it’s time for the group date. When the names are being read off there’s one spot left on the group date and it’s between (you guessed it) Hannah B. and Caelynn. Hannah’s name is on the card so Caelynn gets the one-on-one!

Colton and the girls explore the city in a date that we typically expect of a one-on-one. They’re going to street vendors, trying weird local food, and casually putting leaches on their body. Yup, you heard that right. Leaches.

Hannah B. is mentally crumbling during this date because she doesn’t think Colton is giving her attention. She’s worried he’s mad at her for last week. So to get some attention Hannah eats a fish eye. Why would Colton want to kiss you after eating a fish eye? Horrible logic.

That night, Hannah grabs Colton right away to talk, and they clear the air. Colton is happy to have his Hannah back. Yeah, he said “my Hannah,” which is cute I guess.

Cassie sneakily has a great conversation with Colton during the group date. Everyone has been telling me this season they love her, but honestly I hadn’t seen her do too much until tonight. I’m a fan though.

Meanwhile, Courtney has taken Hannah B.’s energy and is freaking out to Demi that she hasn’t gotten any time to talk to Colton. Someone tell this girl how the show works. If you want time with him, you have to go up to him. He will not come find you, especially if you are not that interesting.

Demi tries to explain this to Courtney, but because she’s Demi, she sees a window of opportunity to talk to Colton a second time. This makes Courtney sob AGGRESSIVELY and whine to Demi for a second time about not getting time with Colton. Please remember, Courtney has not tried to talk to Colton and been shut down. She’s totally in her head. Yikes.

Demi gets the group date rose for opening up about her mom being in jail. Colton likes that she sticks by her family, which is “exactly what [she] wanted to show him.”

Now to the best part, Caelynn’s one-on-one. If you know me in real life, I’ve probably told you my love language is gifts so of course I’m dying when Colton takes her shopping on ABC’s dime so she gets ALL THE THINGS. Everything she puts on Colton’s face lights up, and he tells her she needs it. COLTON WITH ABC’S CREDIT CARD IS MY DREAM MAN.

Caelynn goes home and sick brags the girls by showing off all her new things and gets ready for dinner with Colton. At dinner, she tells Colton about being sexually assaulted in college and Colton handles the conversation super well. He lets her know she’s safe with him, and it’s seriously so sweet. 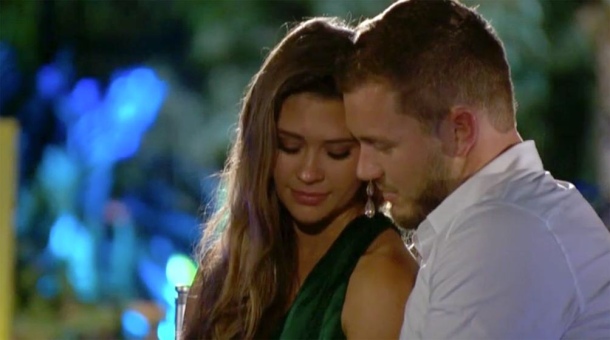 They had an actual, real life conversation on The Bachelor, which I’ll admit is pretty rare so it was nice to see. I’m in love with them! They actually look like they’re in a relationship, a real one, not a fakey TV one. So obviously, Caelynn gets a rose.

Note: At this point I’ve been smiling for the whole 20 minutes this date has been on TV so my face kind of hurts.

At the cocktail party, the drama between Caelynn and Hannah gets squashed after this date. Caelynn is over it and they agree to leave it all in the past and move on. Thank goodness!

#TheBachelor *Caelynn shares her emotionally traumatizing story AND squashes the drama with Hannah B. by promoting women empowering women* All of Bachelor Nation: pic.twitter.com/HE4iYBEJLs

Hannah G. and Colton go to his room during the party, and she tries to open up. It doesn’t really go anywhere though. Instead they get in bed WITH THEIR SHOES ON and make out. I guess that’s one way of opening up?

PSA to My Future Girlfriend:

You get in my bed with ya shoes on? You just broke up with me. And I’m calling the police. #thebachelor

Courtney is still being annoying about not getting time with Colton. Demi, who has a rose, has no time for this nonsense. She tells Colton that Courtney attacked her and is a “cancer” in the house.

The girls are all sitting around on the couch, and Courtney asks about being called the cancer of the house, and Demi owns up to it. Demi does not back down, and I love her for that! Now, Demi has to wait and see if her talk with Colton worked.

Well it did, and Courtney went home. Bye Courntey

“Dr. Demi cut out the cancer”

Who Got the Boot:

Tracy (FINALLY) and Courtney (PRAISE BE)

I never do this, but I would like to shoutout Colton because I doubted his abilities to be the bachelor and he’s proving me wrong.

Everyone’s been warning me to look out for Cassie and after last night I see why. Caelynn is still my #1 though.

Courtney, who apparently has never seen this show before and cannot grasp the concept after three weeks. Thankfully she’s gone now.

THX 4 THE PICS ABC AND CONTESTANTS!!!